By the Power of … wait … this isn’t right …something is missing.

WARNING: This review contains several MAJOR spoilers. Read at your own risk.

Kevin Smith’s new (and highly anticipated) Master of the Universe: Revelation has finally arrived. But reviews are, well, as mixed up as Skeletor at Disneyland.

Streaming on Netflix, He-Man fans of old were riding on waves of excitement as the launch date for the show’s premiere edged closer. Old and new fans alike looked forward to revisiting and embracing the spirit of 80’s heroes and the 40-year comeback tour of the Universe’s true champion: He-Man.

Boasting an impressive line-up of voice actors, and with none other than Kevin Smith at the helm, nothing could go wrong …

But then, it aired, and the revelation was anything but what fans expected. 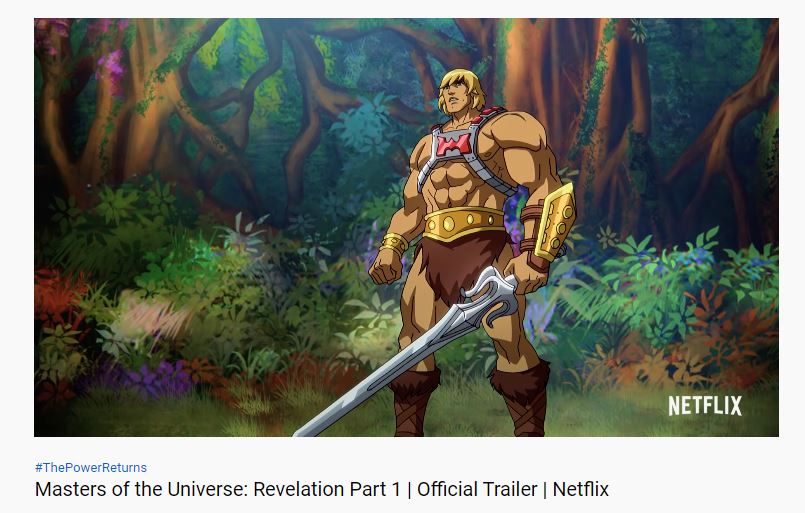 Episode ONE! Kevin, why? Why? By the Power of Netflix, why?

OK, now that we’ve gotten that out of our system, let’s take a closer look at how the show still manages to continue on in what some may argue is a very salvageable and daresay enjoyable way.

A Foreshadowing of What Was to Come

According to Kevin Smith, the hero’s eventual doom was foreshadowed early on. OK, fine. But what about Skeletor? How did he cheat death?

In an interview on Netflix Geeked’s Twitter, Smith commented, “We thought him and He-Man died in the final battle. He-Man, we know, died. He went up to Preternia. And Skeletor, no sign of him there, but also no sign of him, as you saw, in Subternia either. So he stayed alive by casting his essence into Evil-Lyn’s wand-staff at the final second before everything went kablooey. And so there, he’d been with them on the whole journey.”

Masters of the Universe: Revelation Part I – A Synopsis Part I of the series hits us with the unveiling of Castle Grayskull’s deep-rooted secrets, throwing Eternia into chaos and setting the stage for Skeletor’s big move. Meanwhile, we see a welcomed addition to Eternia’s knighthood; Teela, the Sorceress of Castle Grayskull and daughter to Duncan. She is knighted and named the new Man-At-Arms.

In the battle that follows, Prince Adam is outed as the kids today would say, or Doxed and his identity as He-Man is exposed to those closest to him. Castle Grayskull also held a secret … the Hall of Wisdom, home to an orb embodying all magic that flows throughout Eternia.

Under attack by Skeletor and crew, the orb is set to explode, with He-Man choosing between the destruction of Eternia and everything and everyone he holds dear or risking his own life to use the Sword of Power to absorb the blast.

He-Man’s efforts were a success, but at the cost of his own life, splitting the Sword of Power into two and eliminating magic from Eternia.

If it was any consolation to fans, at the time it appeared that Skeletor too had met the same fate in the explosion. However, we would later learn that Skeletor and our favored hero aren’t really dead.

Here Teela takes center stage, on a quest with the rest of the Masters of the Universe to recover the Sword of Power and save Eternia.

A Hero’s Journey is Never Over Fans may have raged on pre-maturely at their favorite hero’s demise. The midseason finale came in strong, with Adam returning to Eternia from Preternia (where he had been living since his death), along with a newly re-forged Sword of Power.

But not even the Sword of Power would be enough to stop the evil Skeletor. Becoming seriously wounded in battle yet again, Adam lost his sword, giving Skeletor the chance to take the Power of Greyskull on himself, becoming a godlike giant in the process.

The show’s release has left fans and critics deeply divided. Rotten Tomatoes give the show a 95% Fresh Critic Score, while audience ratings lag significantly behind, coming in at an abysmal 36%.

The backlash has been strong and steady, with the majority of old-school fans upset over Adam’s fatal sacrifice and the show leaning on Teela and the supporting cast as the major frontrunners.

However, come the mid-season finale, those same disagreeable fans are starting to sing a different tune. With He-Man back from the proverbial grave, our hero and Eternia’s savior is back (we hope) for good.

With Adam seriously wounded, and Skeletor back in the picture, Part I has left us with a cliffhanger that fans are reeling over. We already lost He-Man once … Kevin Smith wouldn’t dare do that to us AGAIN … would he?

Although no official release date has been issued, we do know that a Part I of the series is well underway, and the buzz is that we might even see the return of He-Man before the end of the year.

By the Power of Grayskull, we hope. The Best Looney Tunes Cartoons Episodes of All Time

Looney Tunes is one of the most iconic animated cartoons of all time. Thanks to Warner Bros and creative figures like Tex Avery, the adventures