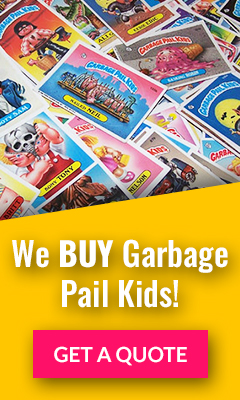 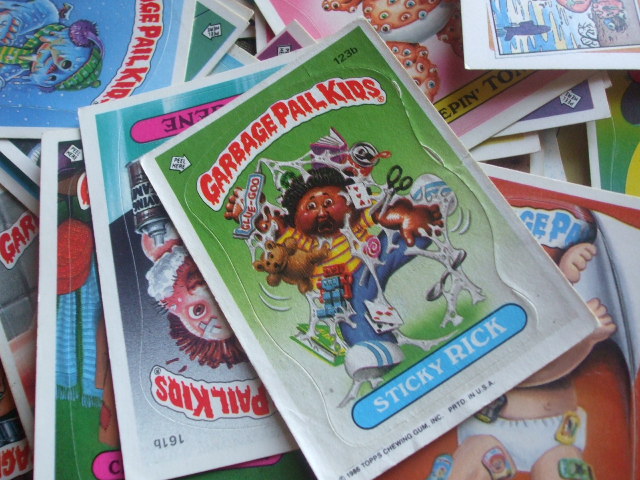 This site contains affiliate links to products. We may receive a commission for purchases made through these links.

They were originally a parody, they were involved in a lawsuit, and they were the cause of controversy in the 80s. Who were they? The Garbage Pail Kids!

Whether you grew up seeing these cards around town or have decided to become a collector of this infamous-turned-famous series, the Garbage Pail Kids have left a lasting impression for those who collected them growing up and even now for newbie collectors interested in building their own collection.

Meant to be a parody of the popular Cabbage Patch Kids franchise, Garbage Pail Kids are a series of sticker trading cards with depictions of child-like characters in rather unfortunate situations. In addition to this, each character depicted had two variations of their card, usually with different names. The backs of the cards also featured puzzles, murals, and most recently, mock Facebook profiles. With their borderline gruesome drawings and names punning the depicted character’s plight, the Garbage Pail Kids were at one point banned in American schools and also faced a lawsuit from the Cabbage Patch Kids.

His alternative name is Blasted Billy but the majority of fans would know him as the only and explosively expensive Adam Bomb. Not only is Adam Bomb a poster child of the Garbage Pail Kids franchise, but he is also one of the original characters introduced in the first set ever released. Prices for an Adam Bomb in mint condition on eBay have reached as high as $12,000 so keep this in mind especially if you have an original Adam Bomb on hand in relatively good condition.

Depicting a vampire à la Dracula style biting into the nape of a motionless Barbie doll, Nasty Nick was the first-ever Garbage Pail Kids card produced. As card number 1 of the original series, Nasty Nick takes a spot on this list and fetches a hefty fortune, one just sold for US $7856.00 in mint condition on eBay!

Portraying the tragic image of a girl getting shocked by a thunderbolt, April Showers aka Stormy Heather is a real heart-stopper: prices can go up to $800 for a mint condition April Showers from the Original Series 1 set.

The Argentina Basuritas is a set of Garbage Pail Kids cards limited to the country of Argentina and was released with only 3 sets over the course of two decades. A complete and original set of Argentina Barsuritas cards could net you around $1500.

Rather than being a single card, Bukimi Kun was a set of cards released as a limited edition in Japan. Though in the Bukimi Kun set several designs appeared in earlier sets, what makes Bukimi Kun set unique are the names of the characters: they are written in the Japanese hiragana and katakana syllabary. Another factor that makes these cards worth any collector’s eye is the fact that only several hundred copies were released in Japan, and so far it is the only Japan Garbage Pail Kids release. A complete set is worth at around $700 but on eBay a Bukimi Kun Nasty Nick/Evil Eddie card has a $15,000 price tag.

The Garbage Pail Kids released in Spain, La Pandilla Basura roughly translates to “The Trash Gang” and unlike other series, has not seen a 2000s revival despite releasing 4 sets throughout the 80s and 90s. Even without the cards, an empty La Pandilla Basura album cover itself is worth around $400 or more.

Released in Brazil, Gang Do Lixo is iconic for its image of a boy sticking his finger up his nose and literally through his head. The Gang do Lixo release would go on to be so popular that not only were another two releases planned throughout the two decades after the first release, another company released a bootleg version titled Loucomania. Act fast: a full Gang do Lixo set goes for up to $300 on eBay.

Like Japan’s Bukimi Kun release where the names of the characters are replaced with the native language of the region, Havurat Ha’zevel has some of our most iconic Garbage Pail Kids but with Hebrew names instead. Though the back of the cards are blank cardboard, a Havurat Ha’zevel set can land you a handsome price from $185.

The Flashback Series specifically features different iterations of Adam Bomb, the poster child of the Garbage Pail Kids franchise. These iterations essentially incorporated different images of how Adam Bomb’s head would blow apart, ranging from a colorful arrangement of fireworks to what seems to be Adam Bomb popping out of his skin. Cards from this series range from around $20 to $115 on eBay.

You may or may not agree about whether or not this caricatural depiction of George Washington is indeed gorgeous, your wallet would appreciate his potential worth: a mint condition of a 1985 Gorgeous George card is going for just under $200.

Showcasing the image of a boy slipping up during a shave—shaving off the skin of his cheek rather than his overnight stubble—Shorned Sean was originally released with the fourth series and will definitely shave off dollars from anyone’s wallet as it’s worth a handsome price of $300.

Based on the motorcycle-riding group Hell’s Angels, Disgustin’ Justin is a Series 2 release depicting a biker guzzling down a can of beer while on the go. What makes this card special is its direct reference to alcohol; while previous cards only allude to the presence of booze, Disgustin’ Justin makes it clear that he’s drinking and piloting at the same time. Prices for a mint condition Disgustin’ Justin cards fetch up to $250.

From the Battle of the Band series, Jolted Joel depicts a kid playing electric guitar while being electrified (whether by his performance or not we aren’t too sure). While not as gruesomely depicted as his fellow Garbage Pail Kids, a Jolted Joel from the 1985 Original Series 1 set will gain you $200 if bought by an avid collector. A Japanese version just sold for over $1000.

What looks like a post-apocalyptic landscape is only the disastrous effects of a boy with bad breath—Bad Breath Seth to be exact. From the original series 2 and featured in the official Garbage Pail Kids movie, Bad Breath Seth is worth about $200 in good condition.

A literal warning about playing with fire, the Oozy Suzy card shows a wax model of a girl being melted into thick globs of wax by a gentle flame. First released in the Original Series 1 set, a 1985 mint condition Oozy Suzy can net you around $890 on eBay.

If you have a headache looking at this card, which shows the internal battle of a two-headed girl as each head dukes it out, maybe you could use some extra cash to grab some Advil along the way. A 1985 release of Schizo Fran in mint condition could potentially net you up to $2,200 on eBay.

If you find your hands tied trying to hand off your Tongue Tied Tim card, never fear as Tongued Tim can fetch a handsome price among trading card collectors: prices for this card go up to $340.

While we’re all familiar with the act of making faces with our hands, Ugly Hans takes it to a whole new level by making the face itself come alive. Face the ugly no more as a 1986 Ugly Hans can sell for as high as $660 on eBay.

Interpreting the phrase “birthday suit” to a literal level, Unzipped Zack may be from the 4th old series but he’s worth a pretty penny: copies of this card can run up to $600.

Showing a boy graffitiing a wall (with the slightly mysterious words SMUT below his spontaneous master piece), a New Wave Dave from the Original Series 1 set goes for around $1,300.

Before Trump, another well-known president was featured as a Garbage Pail Kids card: former president Ronald Reagan. While he is dropping not beats but probably policies at the presidential mic stand, prices for a mint condition Rappin’ Ron can go up to $250.

Though only released as a card in the 2017 Adam Geddon set, a mint condition Trump Terror card is already priced at near $300 on eBay. Whether one regards it only as a special edition or a reflection of the current political climate, the Trump Terror card is a memorable addition to any collection, nearly completed or not.

Keep in mind that we may receive commissions when you click our links and make purchases. However, this does not impact our reviews and comparisons. We try our best to keep things fair and balanced, in order to help you make the best choice for you.